It’s About the Animals–and Humans, Too UW–Madison’s Shelter Medicine Program provides a needed resource for at-risk animals and those who care for them each day.

I sit next to Sandra Newbury DVM’03 in her silver Subaru hatchback — Peanut, her 14-year-old rescue pup, is in the backseat — as she tells me about her weekend in northern Wisconsin.

“I’m a white-water kayaker, so I go up north almost every weekend,” she says, adding that she kayaks elsewhere in winter.

It’s a Wednesday morning in October 2019, and we are en route to an animal shelter in Illinois, where Newbury — the director of UW–Madison’s Shelter Medicine Program — will meet with a group of fellows who are there to learn how to improve the welfare of shelter animals.

Known as the Northern Tier Fellowship, it’s one of several efforts that the program, housed within the UW’s School of Veterinary Medicine, carries out for veterinarians and shelter leaders around the world. Started more than five years ago by Newbury, the program is a leader in the relatively new field of shelter medicine, which focuses on caring for animals in need. The program conducts its work through education and outreach-based research — findings based on work with shelters rather than through clinical trials. Each year, this particular fellowship invites shelter directors and managers in northern states to visit shelters that the program has previously worked with to gain exposure to new ideas and practices that help improve animals’ lives.

Among the many practices covered during the fellowship, the program staff emphasize an unexpected point: in what can be an emotionally taxing field, human welfare is critical to improving animal care. 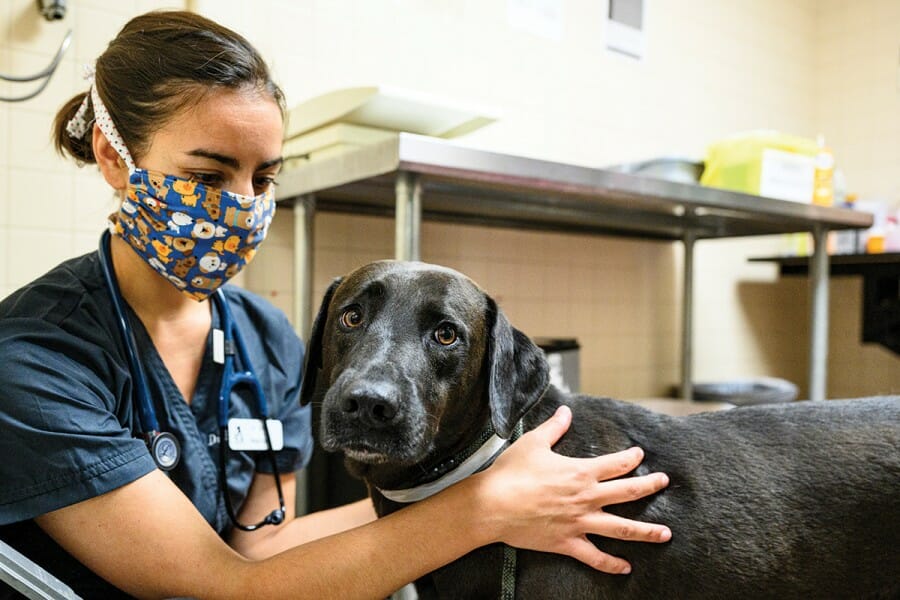 Back in the car that afternoon, Newbury, Peanut, and I return to Madison to meet a second group of fellows at the Dane County shelter. This time, Peanut shares the backseat with three mewing kittens, who are being transferred to help lower the Illinois shelter’s cat population. The kittens — whose mother no longer wanted them — will receive the attention they need at the Dane County shelter.

That morning, Newbury demonstrated to fellows how to identify and manage overpopulation; she noticed that the shelter’s number of cats was over capacity and made recommendations to lower it, such as starting a cat adoption sale and relocating the kittens to a different shelter.

Now on our drive to Madison, I learn that Newbury isn’t only a white-water kayaker — she is also a local circus performer and an aerial dancer, and she has a residency through the Overture Center for the Arts to teach circus arts to children at Madison’s Lussier Community Education Center. She decided to give circus performance a try after enrolling her son in classes.

“I’m pretty open about it,” she says of her hobbies. “I used to keep it secret, and then I was like, ‘I think people should know because everybody knows I work really hard at what I do, and I love what I do as a profession, but I also love these other things that I do.’ ”

Loving things outside of the profession is important. Although the reasons aren’t fully understood yet, veterinarians have high suicide rates. According to a 2019 study from the Centers for Disease Control and Prevention, female veterinarians are 3.5 times as likely and male veterinarians are 2.1 times as likely to die from suicide compared to the general population. Being open about her outside interests, Newbury says, is part of the program’s effort to teach veterinarians and shelter staff the value of work–life balance. She leads by example, and sometimes she will build in time for yoga and other activities during the fellowships.

“You can see how sheltering could really be consuming. A lot of the time, especially in shelter medicine, I think, people try to solve the problem,” she says, noting that workers will sometimes bring animals home rather than allow themselves distance from work. “What I try to teach, especially my veterinarians, is to balance their lives so that their career in sheltering will be sustainable and that they won’t just come in, work in shelters for a year, and be so burned out that they never want to help again.”

A Need for Structural Change

Formerly a full-time artist, Newbury was inspired to volunteer for a local shelter after seeing stray cats near her Chicago studio. As she gained more responsibility in the shelter, she saw firsthand veterinarians’ limited involvement and was concerned by their lack of knowledge about shelter care.

“At that time, there really weren’t veterinarians who were interested in animal shelters,” she says. “There was no such thing as shelter medicine.”

In addition, veterinarians working in shelters were often criticized for their role in making euthanasia decisions, especially those made to control crowding. No one wants to be called “Dr. Death,” and veterinarians would quit after a year, contributing to a shortage of professionals and creating a knowledge gap and missing skill set for animal care and welfare.

Even later on, as Newbury helped build a shelter medicine program at the University of California–Davis in the early 2000s, there was misunderstanding around what program staff meant when advocating for population management.

“People thought that all I wanted to do is euthanize animals,” Newbury says. “I got to a point where, when I would give presentations on this, I would say at the beginning, ‘If at any point you think I’m saying I want you to euthanize more animals, euthanize animals faster, or anything of the kind, please stop me and raise your hand, because I don’t mean that, and I want to try and clarify that right at the time.’ ”

Starting in her early years of working for a shelter, Newbury sought to counter the spiraling negative trends she was noticing. She created a protocol to make the most of the shelter’s limited veterinarian access, providing staff and volunteers with methods to try when a problem arose with one or more animals. If the protocol didn’t help an animal, that informed staff members that the animal needed the veterinarian’s attention — maximizing the veterinarian’s time and helping as many animals as they could, as quickly as possible.

“I realized pretty early on that what was needed were these structural changes to animal shelters, instead of just trying to deal with each individual problem — which of course doesn’t mean you don’t deal with the individual problem. It’s just a way of dealing with it more efficiently,” she says.

Read the full story at onwisconsin.uwalumni.com.